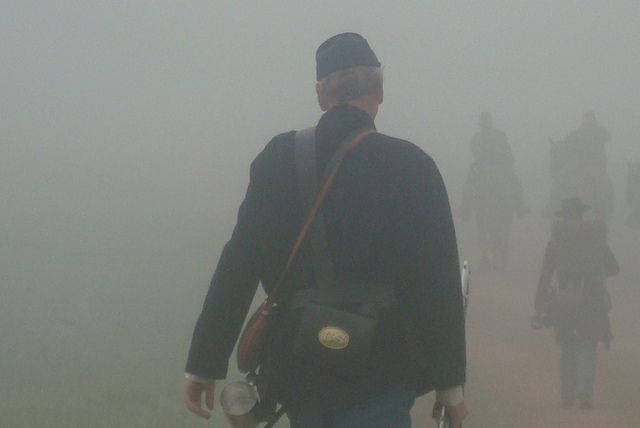 My father used to tell me a story about an experience he had in the late late 1950s, while on a sales trip through the hills of rural Pennsylvania, my grandfather was travelling on a dirt road when he saw a rough looking man walking by the side of the road far off into the distance. He always said that his dirty faded blue clothes looked torn and he was stumbling, like he had either had too much to drink or had been in a fight. The closer he got to this man, the worse he began to feel for him and thought he would at least offer him a lift to the next town. As he got closer, he saw that this man was all cut up and burned and wearing a blue uniform with a blue fedora with a yellow band. Then he noticed that the man was wearing a Civil War military uniform.

My father went to pull over after passing him further up the road. He then sat there and waited for this person to come walking up to the car. Then he looked behind him and could see the man stumbling up behind the car so my father opened the side door for him and then sat and waited, but no one came to the door as he sat there. He looked behind him in the back window and the man had disappeared.

My father got out of his car and looked around, thinking the man may have tripped or fallen into the gutter. To his dismay he could not find the man. My father just assumed for whatever reason the man went off into the woods or something.

Deciding to continue his journey he got back into the car shut both doors and returned on his way. About three miles ahead there was a sign that read ‘Gettysberg Battlefield.’ My father said when he saw that it really creeped him out.