When the Doughton’s moved in to the rental house it was with some relief. They had been looking for sometime and this house was the perfect combination of size and location. They had finally managed to find the house with just two weeks remaining on their existing lease as well. In fact, the house was so nice and so cost effective they could hardly believe their luck.

The house was semi-furnished which meant that it wasn’t going to look too empty with their sticks of furniture. All of their proper furniture was still in storage in England where it would remain until their return in a couple of years. Having some extra furniture then was a bonus.

In the spare bedroom, one such piece of furniture was a large wooden closet. Mrs. Doughton thought it would make the perfect spare storage for her additional clothing and so she intended to use it. As she started to move some of her less well-used clothing into it, she discovered an old pair of black men’s leather shoes in it. Her initial reaction was to throw them in the trash, but then she re-considered. They weren’t their property and perhaps she should put them in a plastic bag until she could check with the owners? The plastic bag was then removed to the downstairs and placed in a cupboard by the front door.

That night was their first night in their new home for the next two years. They were thrilled and happy and celebrated with a take away and a bottle of wine by candlelight in the dining room. However, it wasn’t long before they were interrupted by the sounds of footsteps upstairs. They looked at each other quizzically before Mr. Doughton went off to investigate. He came back shortly having seen nor heard anyone.

As they retired to bed and switched out the lights, they both jumped as a huge crash sound came from the spare bedroom. Again, Mr. Doughton got up to investigate and this time he came back looking pale.

“All the clothes you placed in the closet are a right mess,” he said. “It’s as if someone rifled through them looking for something.”

Both were now beginning to feel scared. They held on to each other in the semi-darkness after the light was switched off. Another bang and crash followed by definite footsteps and on came the light. Their hearts beating and icy sweat running down their backs, they investigated the spare room together. There, they found the closet door open and the clothing scattered around the room. They looked at each other in horror. What had only moments ago been their dream temporary home was rapidly turning into their worst nightmare?

It continued like this all night. Footsteps, bangs and crashes, occasional moans. Every time they went to investigate, no one or nothing was there. They spent most of the night huddled together downstairs until they could leave for a coffee shop. Anything to get out of the house.

At the coffee shop, Mr. Doughton called the landlord. After several attempts he got through. He explained that it would be impossible for them to stay in the house under such circumstances. The landlord listened patiently.

“Can I ask a question?” said the landlord.

“When you used that closet in the spare room, did you find an old pair of leather shoes at all?”

“Why yes, we did,” said Mr. Doughton somewhat puzzled.

“And you removed them I suppose?”

“Put them back and all will be fine. Old Mr. Heldenburg doesn’t like losing his shoes. We have found he goes looking for them if he can’t find them and he makes quite a noise, as you have discovered.”

After a short discussion, the Doughtons’s decided to give the suggestion a try. It was such a cost effective and convenient home, why wouldn’t they? The shoes were returned to the closet.

The Doughton’s enjoyed a two-year peaceful rental, but they also left a note in the closet about the shoes for the next tenants. 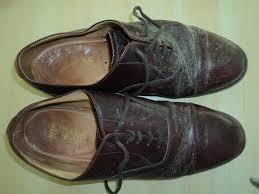 Taken from My Haunted Life 3