A friend of mine at college moved into a new flat at the beginning of term. It was a nice, big, well-equipped flat too, and the rent was almost too good to be true. After a month, he moved out again. Here is why. Over a beer or two, he told me that the place simply seemed too good to be true. The price was too low for such a nice place so conveniently located. However, he took it and counted his lucky stars. At first, all seemed fine and dandy. Periodically, however, especially around pub throwing out time, the doorbell would ring. He would go to the door and find no one there. Given the time of night it usually occurred, he put it down to drunken and playful neighbors.

Over the next two weeks, his neighbors began to play this trick at other times, too; and when it started happening in the early hours of the morning, he felt it was time to keep an eye out and complain. He saw one of his neighbors in the corridor the next day and asked if perhaps it were him playing the trick or perhaps they knew whom it might be. The neighbor, an older man, simply stared at him and said nothing at all. My friend thought this quite odd behavior.

When the owner arrived at the weekend as arranged, my friend was really getting quite angry. Several sleepless nights had put him in a foul and angry mood. He wanted this tomfoolery to end and end now, and he told the landlord this as they stood in the kitchen, drinking coffee. The landlord went slightly pale as his new tenant explained the problem. He put down his coffee and said, “Come with me, will you.”

He led his new tenant to the front door and opened it and then said, “Ring the doorbell, please.”

My friend pushed the small, round button as he imagined the practical joker in the building might have done. However, the bell did not ring. “You see, the bell doesn’t work. It hasn’t worked in a long time because we unwired it.”

My friend sucked air like a fish in bowl as he took in exactly what he had just heard… and then he understood.

“You mean, there is no bell?” he asked as if to make sure.

“There isn’t and hasn’t been a bell in a long time,” said the concerned landlord.

Unsurprisingly, my friend immediately moved out.

This true story from My Haunted Life Too by G. Michael Vasey 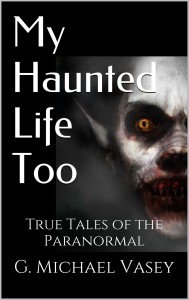