This incident took place in Austin, Texas on August 19, 1995 between 11:30pm and Midnight.
A friend of mine named Kevin had been going thru some bad times of late. He had been suffering from partial paralysis from an injury he had sustained years ago in a diving accident. His business was failing, his bank account was dwindling and since he had lost his lease with the apartment he lived in, he had to live with a friend until he could get back on his feet. As sometimes happens in all of us, Kevin lost hope and felt that there was no way out and so, committed suicide on August 17th. I was told about this the next day by a mutual friend of ours. A bunch of us got together later to remember him & grieve.

Two nights later, while at a payphone at the corner of S. Lamar and Barton Skyway (a well lit street corner) talking to a lady friend, I caught a glimpse of something moving out of the corner of my right eye. I looked to my right across the street and saw Kevin! He was walking without any sign of paralysis at all! He looked completely solid. As he walked he looked at me, smiled, nodded, and then disappeared! Oddly enough, I was not frightened by the experience, but I sure was surprised.

I went and told another mutual friend of ours of my encounter and he told me that he had heard that Kevin’ Sister In Law had also seen him. According to her report, she was making some sandwiches in the kitchen of the house she shared with her husband, Drew (Kevin’ brother), when she felt a chill, followed by the feeling that she was being watched. When she turned around, Kevin was standing in the doorway of the kitchen a few feet away from her. He spoke to her saying, “I’m okay. Everything is alright. Where’s Drew?” She screamed and he disappeared. She and I are the only ones who saw him. Two days later, Kevin was taken to Dallas and laid to rest there.

As far as I know, his ghost has not been seen since. 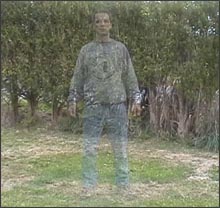