This happened in 1988 when I was remodeling my house. I had 3 carpenters staying in at the house so that they could save on travel expenses and also, so they could start work on time. The other workers opted to go home since they lived closer to the house. After about a week of work, my lead carpenter suddenly changed his mind and said they would rather go home each night than stay at the house. I asked them why and here is his story…

They were sleeping on the floor of the master bedroom since it was the only one with carpeting. At around 2:30 a.m., he stood up to use the restroom, which was adjacent to my walk in closet. You have to go through a door to get into the walk in closet area and get to the restroom that also has a door. As he was doing his thing, he looked at the mirror at the end of a very short hallway (for lack of a better term). There he saw a lady was standing behind him. He looked over his shoulder, but there was no one there. When he looked at the mirror again, there she was standing behind him.

He ran towards the door to get out, but there was a strong force that was fighting with him as if not wanting him to leave the room at all. He finally gave a yell and the other guy woke up ran to see what was happening and opened the door for him. There he was in the corner with his hands over his face shaking.

When he told the guys what had happened, they said it was best that they no longer stayed at the house.

So I had to let them go home everyday from then on until the remodeling was done. 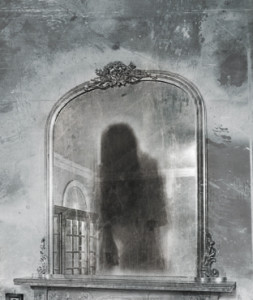