When I was a young boy, my step father’s friend was house sitting his brother’s huge white-washed Colonial farmhouse. He invited us over to look at the house. Immediately that we went inside that house, I knew that there was something that I didn’t like about it, and it wasn’t just the owner’s two huge Great Danes who stood almost as tall as me and followed me wherever I went. Something evil lived in that house.

A little later during a tour of the house, my suspicions were confirmed. “Do you want to hear about the man who built this place?” we were asked. My stepdad said “Sure,” and the friend went on. “They say the man who built this house was driven crazy by what he had seen during battle, and one day, he tried to set fire to it in order to kill his family. They lived, but he died in the process.” My stepdad laughed it off because he genuinely doesn’t believe in things like ghosts, but me, my mum and the friend’s wife all shuddered.

Towards the end of the tour, the adults were talking in the huge kitchen when the friend invites my mum and stepdad into a room off the kitchen. My mom tells me to wait there, which I did not want to do. I begged her not to leave or at least take me with them. She wouldn’t. 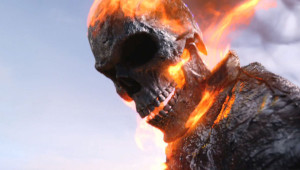 While I waited in the kitchen, the two great danes sat in a little room made just for them with a TV in it. I watched TV with them for a while, until they both snapped their heads to the side to look around me. I turned around. I wish I hadn’t. Behind me was a man. His skin was charred black. He didn’t look like more than a skeleton with burned skin wrapped around the bones. The only part of his face I could actually make out was his mouth. He was smiling at me with a very big, insane smile. His teeth stood out from the rest of his blackened body.

He vanished as quickly as he came. I started crying and called for my mom until I was screaming for her. I didn’t tell her what I saw until years later because I knew my stepdad would make fun of me.

Originally posted on Reddit and edited for use here.