Sometimes, whatever is behind this Matrix in which we live has a disturbance, and if anyone is around to notice, something strange and sometimes scary occurs. On our many weekend camping trips, we visited many locations around east Yorkshire. There was one location that I remember in particular because of what one of our fellow camping fanatics told us.

The location was a small town outside of Hull in the chalk hills called the Wolds. At one time, the town had been the site of a shunting yard and a very long tunnel on the main railway line. By the time we visited, the railway lines had long gone, and the land had fallen into disuse. We visited the tunnel, though, and we walked the entire distance with flashlights to find the other end (over a half-mile away) blocked with barbed wire. It was fun walking through that brick tunnel and seeing the black carbon-stained roof and disturbing the bats that now called it home.

Later that day, we were telling some of our fellow campers about our exploration of the tunnel and the old shunting yard. He asked us how it looked. We told him that it was a pretty dilapidated and overgrown wasteland. He nodded and then proceeded to tell us the strangest of tales. 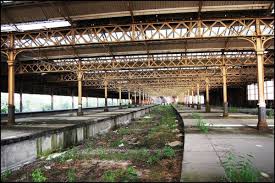 A previous year, he told us, the weekend camping had been in the same location organized by the local camping club. He, too, had decided to take a stroll and look at the old railway tunnel, and so he and a friend set off in the morning on the short walk to the shunting yard location. As they came over the brow of the hill and looked down into the shunting yard, they were surprised to see an engine there, throwing out grey steam and black smoke. The shunting yard was a hive of activity with men running around and wagons filled with supplies. They even heard the blowing of a whistle and the distinctive sounds of a steam engine. The two men looked at each other in total surprise and shock. There hadn’t been a steam train on that line in years. In fact, there hadn’t been a railway line there in years.

When they looked back down into the shunting yard, there was an overgrown piece of wasteland littered with piles of pebbles and stones for road works. No engine, no men, no smoke nor steam. They both sat down and discussed what they had seen, quite shocked. Each man had seen the working shunting yard initially. They sat for some time and then ventured down to the yard and to the tunnel entrance. It was now exactly how they had expected it to be.

For just a moment, had the two men looked back through years of time and seen a scene from the past? Had a glitch in the Matrix been experienced by the two campers? We found it a fascinating story, and I recall being rather jealous that it hadn’t happened to us, too.

Story from My Haunted Life Too by G. Michael Vasey