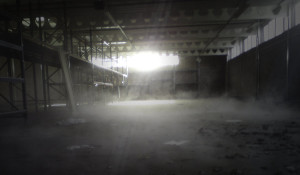 After hearing that there was an old warehouse outside of town, six of my friends and I decided to go out there and see what we could find. We all had an interest in the paranormal, and this was a good opportunity to see something.

We arrived at the site and went through the first three buildings really just having a good time. We entered the fourth building and the walls were covered in graffiti, quite strange graffiti really.

After being in there for a while, pieces of concrete started to fall, or so we thought. We later realized that it was rocks that were hitting the wall before the ground, which lead us to the conclusion that they were being thrown. It was at this point that we got brave and decided to turn all of the flashlights off at once and stand against the back wall.

Every single time we turned the flashlights off, a rock was thrown. We decided to leave the lights of for a longer time. This time, we heard something walking across the other end of the room. We waiting in silence, and kept hearing footsteps. When my friend finally decided to turn the flashlight on and direct it to that area—nothing was there. We decided it was time to leave. On the walk back down the trail, limbs kept falling from nowhere. In other words, there was no tree above it. At one point, a rock landed by my foot. Rocks don’t fall from trees. We haven’t been back there since.

But there’s an interesting endnote to this. Later that evening my girlfriend told me privately that something had grabbed her foot and tried to yank her away from me.