Im 30 years old  now but this experienced happened to me when I was 21. Just 2 days after my birthday in fact!  I was working for a fast food joint as a driver making deliveries. I went out on a delivery that day and on my way back to the office, a bus skipped a traffic light and hit me and my motorcycle on the side. When I woke up, the back wheel of the bus was pressing against my side and I was laying there under the bus in pain.  All of my fingers on one hand were pointing in the wrong direction and that freaked me out. 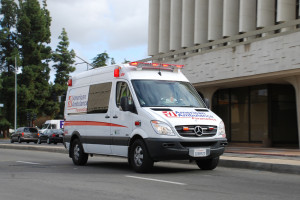 Out of nowhere, this small girl was sitting with me underneath the bus and talking to me just saying “You will be fine.”  I told her to get out from underneath the bus as that was is no place for a child. When the ambulance arrived on the scene, they strapped me to a board and lifted me into the ambulance where an old man with a leather jacked was sitting. He asked me what had happened and I told him the whole story.  He also told me that I would be fine.

When we arrived at the hospital, my Aunt was waiting for me.  I saw one of the paramedics speaking to her and then they sent me right into the emergency room to check me for brain damage.

I was in the hospital for a week and then went home with cracked ribs and broken fingers.  Everybody told me that I was lucky to have survived the crash.

When I asked my Aunt what the paramedic had told her, she said that I had been talking to myself the whole way to the hospital in the ambulance and so they thought that perhaps I had brain damage. I told her about the man with the leather jacket who was in the ambulance with me and described how he looked.  A couple of days later, I saw a framed picture of that same man from the ambulance and when I asked my Aunt who he was, she told me it was my grandfather – he had died in a motorbike accident when my dad was about ten years old.  I just froze and told her that was the man I had been talking to in the ambulance.  She just laughed and said that it could be that I had a guardian angel!