Out in the middle of nowhere about 60km north of Prague sits a strange castle. No one is sure when it was first built nor why. It was not on any trade route, it wasn’t near water, it wasn’t defending anything except a remote hillside far off the beaten track. Even more mysteriously, the castle is often omitted from maps of the region and its origins – unlike most castles in the Czech Republic – are not well known. 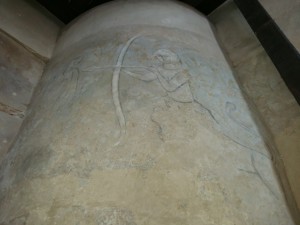 Originally, it seems, travelers passing through the region were subjected to visitations of demons and strange creatures in the vicinity. Back in the 900’s, one can well imagine how remote this location would have been and how frightening the dark forest would have been. Strange creatures such as the left-handed female centaur depicted in the Chapel of the castle were said to hunt human prey in the area. These strange and evil creatures emerged from a strange and deep crack in the landscape on the hillside. It was so deep that numerous attempts to fill it with stones came to naught and so a decision was made to wall the fissure under a chapel within a fortified structure.

The original castle was designed with false windows, no stair cases to connect the different levels and more strangely, the battlements and defences were INSIDE the walls of the Castle. It seemed to have been designed to keep something in as opposed to keep someone out! While the structure was being built, the local Lord looked for volunteers among the convicts helping to build it to go down into the crack and see what was really there. One such unfortunate who volunteered first in return for his freedom, was lowered on a rope into the crack in the Earth. He got no further than a few meters and started to scream hysterically. When he was raised back out of the ground, his hair had turned snow white, he was incoherent and he died the following day! What he saw, we will never know but the locals said that the fissure in the rock was a gateway to hell and that hellish creatures escaped from the opening…..

I was there this last weekend and I will say that it has a very powerful and strange atmosphere – the hairs on the back of my neck stood up the whole time we were there but especially when visiting the Chapel….

You too can visit Hrad Houska – The Gates to Hell.