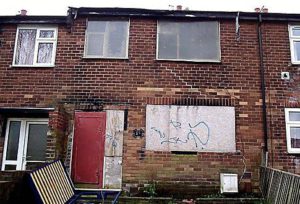 The first time my Uncle Bud felt anything was the week he moved in, he says she was taking a shower and all of a sudden felt as if he was being watched, so he jumped out got dressed and went downstairs to see if someone had come into the house while he was showering. He saw nothing.

A few weeks later he was spending time with his girlfriend when they heard footsteps on the stairs. They described them as heavy footsteps, and even went so far as to turn their music down to hear them. My uncle thought it must be the house settling—but he admitted that he had never heard anything like it in his life. The steps went on for about two hours, off and on.

A few days after that my uncle was having a morning coffee with my parents. My parents had stayed over at the house to help him with some gardening he needed doing. They were drinking their coffee, the radio was on and they were just talking. All of a sudden the radio volume started to increase. My uncle tried to turn it off—but it kept on blaring out. He stood with the plug in his hand trying to turn the radio off. Then all of a sudden they could hear running on the stairs, and a door banging upstairs. My parents were absolutely terrified, and couldn’t wait to leave my uncle.

Later that day my father was looking around the house. He walked into one of the bedrooms and started knocking on the wall. He thought there must be an explanation, and wanted to see how soundly the house was built. He knocked on the wall a few times, and someone, or something, knocked back. He stood there knocking and waiting for reply knocks. The reply knocks came every single time he knocked.

Still later that day my mother and father tried banging the doors to recreate the sound of the door bang they had heard earlier. They banged every single upstairs door, but none made the same house.

My uncle decided to get a priest in, and he did. The priest did a service and everything seemed to settle down. Until one morning my uncle woke up to see an old man staring down at him from the side of his bed. The face was old, and he didn’t look happy. My uncle decided at that point to move out.

My parents had taken some photos while they were visiting with my uncle. When they printed them out they could see a fog on every single photo. It was like someone had been smoking—but nobody had. The pictures were absolute proof to my parents that something was going on in that house. Whoever that old fella was—he didn’t want anyone else living in his house. We heard that a few months after my uncle moved out—the house burnt down.

One thought on “The Paranormal House of Uncle Bud”