It started in 1986 when we moved to Texas. Rather than flying, my husband thought it would be nice to drive since I had never seen that part of the country. My husband had made this trip several times to see family in Gainvesville. He always went the same route when he visited but this time he decided to try something new. It was, apparently, a more scenic way to get to our destination.

We were just on the Texan border when my husband realized that we were running low on gas and we had not seen a gas station for some time. The road we were traveling was deserted with not even a house in sight. I remember that there was a deep curve in the road, and that both sides of the road were surrounded by trees that formed a canopy over the road. I remember that it offered a slight reprieve from the heat. As we got into the full curve, the road suddenly straightened out and the canopy of trees was gone.

At the end of the curve was a very small and old-fashioned gas station with two of the oldest looking gas pumps I had ever seen. I remember seeing bear hides hanging on a wooden fence. As my husband stepped out of the car, a young kid who looked as though he was about eleven appeared from nowhere. He was dirty, barefooted and wearing overalls with one clip missing and hanging down in front. As my husband talked to the boy, I decided to go into the store and get something cold to drink. Bu, what I found there I will never forget. There were two cases of Coca-Cola sitting on the floor in front of the counter. Nothing unusual about that except the bottles were very old, covered with at least a half inch of dust and cobwebs. The counter had a very old case register, the kind that you pulled a handle to run it or add totals. It too was covered with dust. 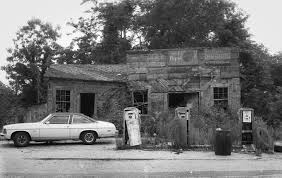 The most interesting thing was a really big cookie jar that sat on the counter with cookies inside. The jar was like the rest, covered with dust and cobwebs and no evidence of any disturbance. The store was extremely dark and musty smelling, and as my eyes adjusted to the darkness, I noticed that hundreds of what appeared to be animal hides were hanging everywhere. That is when I decided it was time to get out of that place.

When I got back outside, my husband had finished pumping gas and was engaged in conversation with the boy. It was at this time that I noticed something else about the boy: all of his teeth that I could see were filed to sharp points, like a carnivore’s. The short time that I stood there, I noticed that the boy kept looking at my husband’s stomach and smiling. He was trying to convince my husband to go fishing with him. My husband asked him where he lived and he pointed to a cliff, but we saw no houses. I told my husband we needed to go and the boy kept begging my husband to go fishing.

I got in the car and waited about two seconds before yelling at my husband. He finally told the boy he had better go before he got in trouble with me. As we drove away, neither one of us spoke for several minutes, then we turned and looked at each other and let out a sigh of relief, as if we had just escaped with our lives.

We drove about 20 minutes down the road and stopped at a cafe. As we sat down at the table, we noticed that the placemat was one of those paper mats that shows a little map of the area. We tried to find the gas station on the map, but failed. We decided to ask the waitress about the little gas station. We were totally shocked at her reply. She said that there wasn’t a gas station in that direction for at least two hours, and she had lived in the area all of her life; even the name did not sound familiar to her. She told us the heat had probably gotten to us and we should remember to drink plenty of water.