We live in a (very) haunted farmhouse in Scotland, UK! We moved into our house around eleven years ago. It’s remoteness is what attracted us initially and the views from the windows to the open fields and mountains beyond. Almost as soon as we moved in, we heard noises during the night and just assumed we had prowlers around the land, maybe poachers looking for rabbits or deer. We would arm ourselves and head off outside to confront whomever was there, but never found anyone.

Eight months passed and one night while we were in bed asleep, there was an almighty commotion coming from downstairs. We rushed downstairs and as per usual we headed outside, it was only when we came back inside we noticed the cause. A large brass ship’s bell which had been sitting on its rim on a high shelf in our pantry, was now lying in the middle of our kitchen floor! It had only travelled fifteen feet down the hall and around three right angle corners! We looked at each other and at that point realized that something paranormal had to be happening here. We are both well educated people, scientists in fact, and over time we looked at all possible explanations and always drew a complete blank. 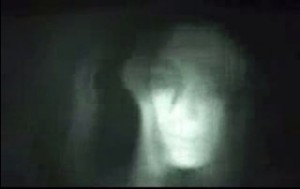 Through the years our house and ‘friends’ have fascinated us. We have seen three apparitions, one teenage boy, one lady and a gent. We think it’s the boy who’s playing games with us though. We hear laughing when we see unusual activity, almost like a child undertaking a practical joke on someone whilst watching the scene unfold! We have seen objects move, objects disappear (literally), heard voices talking/whispering, objects floating, unpleasant smells, the list is endless.

However, the most interesting (and somewhat entertaining) phenomenon is definitely the mimicry. We all have experience of this. Someone calls your name or speaks to you about something from another room in the voice of another family member. When replying it becomes obvious that the family member has not sought your attention at all! In fact, most of the time, they themselves hear nothing! To put it into context, one night we were sitting in the living room watching television. Our son was out in the car and at around 10.30pm we clearly heard him coming in through the back door, walking along the hall into the kitchen and opening and closing the fridge door, where he sighed and muttered something about us not having anything nice to eat. He then (accidentally) kicked the cat’s food dish (we heard it clearly) and he said “oh shit” (it was our son’s voice)… We shouted back “everything okay?” and had no reply! We went to check on him but he wasn’t there, no one was there! Our son eventually came home after midnight. It was just another game for our ‘friends’.

Nothing sinister has ever happened here, not to us anyway. Three years had passed when a workman arrived to paint our house. He got chatting to us and out of the blue he asked us how we were getting on with the ghosts! We were shocked, because we told few people about this. He went on to say that the previous occupier (who he knew personally) had left with her three young children in the middle of the night terrified. She had also experienced paranormal activity, but was driven from the home when a window was smashed purposefully, apparently she wouldn’t go back to even pack up her belongings, having vowed to never step foot there again!

So, if all along it was the intent of our ‘friends’ to frighten and chase us from here then they have indeed failed dismally! We live with this, it doesn’t frighten us at all, it actually entertains and educates us, perhaps one day we’ll even write a book. This is just a snippet from our daily lives, we could recall stories for a while yet but don’t want to go on too long.

Welcome to our house…..