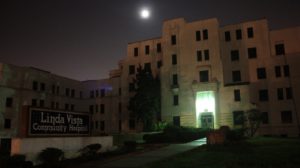 With Halloween just around the corner… for your terrifying pleasure, we are highlighting some of the most unknown haunted locations in the United States. Over the next few days, we will be sharing creepy places… some of which may be in your locality. Today, we are going to look at Los Angeles. The city of Hollywood. A city that has its fair share of horrors, but this horrific hospital is one place you wouldn’t want to visit in the middle of the night alone…

The Linda Vista Community Hospital, located in the Boyle Heights area of Los Angeles, originally opened as the Santa Fe Coastlines Hospital.  Built in 1904 at a cost of $147,000 and opening in 1905, the hospital was used as the main medical facility in the area for employees of the Santa Fe Railroad.

The hospital was designed to be a pleasant, safe place where employees received the best care available.  The hospital, under the direction of Dr. N.H. Morrison, also raised its own cows, chickens, and vegetable gardens, so that patients were provided with the freshest milk, eggs, and produce possible.

But by 1937, ownership had left the railroad company, and the hospital was now open to the public under the name Linda Vista Community Hospital.  Shortly after this change, the hospital took a turn for the worse.  The neighborhood began rapidly declining.  By the late 1970s and early 1980s, gangs had taken over this section of East L.A., flooding the hospital with violence and gunshot victims.  More and more patients were being admitted who did not have insurance. The hospital was becoming blighted with urban decay.

By 1988, the hospital began refusing ambulance service, and Linda Vista ceased operation as a medical facility for good in 1991. Many believed it was the high death rate of patients that led to the closure.  The hospital was abandoned and fell into disrepair. It has been this way ever since.

Hollywood soon discovered the decaying hospital, and it became a filming location. Many Hollywood movies were filmed here including End of Days and Pearl Harbor. Even ER visited the site for their pilot episode. It was its usage as a filming location that allowed stories of the hospital’s haunted horrors to grow.  Film crews and overnight security all reported myriad strange events and happenings.  Screams, cries, moans, and humming were heard by many.  Darting shadows and flickering lights were observed, even from outside the building.  An eerie, faint green light was seen, a foul odor was smelled on the third floor, people have been touched or pushed by unseen and cold hands, the elevators tend to malfunction, and cold spots are felt, especially near the entrance lobby. Those who have been inside the hospital rarely return for a second visit.

There are also actual apparition sightings. A doctor wearing a tie is seen looking out a corner window on the top floor.  This is said to be the spirit of a doctor who was killed after failing to save a gang-banger in the 1980s. A young woman has been observed pacing the third-floor hallways, and an orderly is seen throughout, making his rounds.  Some have even seen the image of a former mental patient in what is described as the “cage room.”  However, the most famous ghost is said to be the spirit of a young girl, who possibly was struck by a car.  She is heard giggling and is often seen out front by the hospital’s sign, or in the surgical room. 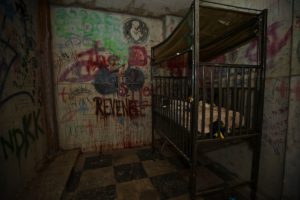 The Linda Vista Community hospital still stands. Those who are in the Boyle Heights area will know of its reputation, and will probably warn you to avoid this location. But if you do find yourself, in the middle of the night, wandering around Los Angeles—it would be advisable for you to stay clear of this hospital horror. Perhaps confine yourself to your hotel room if you are a sleepwalker…

One thought on “Halloween Haunts #1: The Most Haunted Hospital in America The Beautiful?”