A friend of mine once told me this story on Halloween many years ago. It chilled me to the bone. Whether it is true or not, I am not sure although he swore on his mother’s grave that it was.

In the late 1970’s, the central cemetery in west Hull was a real eyesore. It was overrun with trees, bushes and weeds and it was used as a place for illicit activities. Most people gave it a very wide berth. Most of the graves in the cemetery are Victorian and grandiose monstrosities of a bygone era. Pretty damned creepy in fact. These days, the whole area has been cleaned up, tidied and is actually, worth a visit. However, back then, it was a place to be avoided if at all possible.

My friend walking home somewhat tipsy from the pub with a couple of other friends one night in the late 1970’s thought it might be scary fun to take a trip through the cemetery. Who wouldn’t? They decided to walk across it and picking their way between tombstones, heavy undergrowth and trees, to their horror, they came to an area where many graves had been tampered with. Whether for theft or some other macabre reason, in this area in the middle of the cemetery lay scattered bones and open graves with coffins and contents partially exposed. Horrified, the three friends began to hurry creeped out by the place and what they saw.

This is where it gets interesting however because at this point, my friend accidentally kicked something as he moved as swiftly as possible through this darkened field of bones. To his horror, he realized that it was a human skull.

He claimed to me that in a moment of madness, he decided to take it with him and picking up the skull, he ran with his two friends to the nearest way out of the creepy cemetery. Having escaped from the cemetery, he stuffed the skull in his bag and they all went home.

When he arrived home, he took out the skull and examined it. He was actually quite proud of his fearlessness and with some satisfaction, he placed the skull on his bedside table for further inspection the next morning and passed out to sleep.

Awaking the next morning, instead of the skull that he and his friends had collected the night before, he was shocked to find a large ivory chess piece sitting on the table. This freaked him out no end. Where was the skull? Where had this come from? He later confirmed with his mates that he had taken a skull that was now a large chess piece. The chess piece was more scary to him than the skull and after a couple of days, he and his friends returned it to where they had found it – during daylight. They left it back in the cemetery where they felt that it belonged.

Did it turn back into a skull we wonder? Or did he simply imagine that it was a skull initially? We will never know. 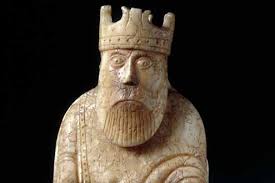 Story by G. Michael Vasey from My Haunted Life Too.

PS – Do submit your encounters with the supernatural using the form below…..