A few years ago, I had the opportunity to see this strange document first hand, as it was on display outside of Brno. In fact, what I saw was a copy of the original. Nonetheless, the effect was chilling. The Devil’s Bible or Codex Gigas is 36inches tall by 20 inches wide and about 9 inches thick. It contains a set of Christian texts including the Bible. It is bound in leather with metal trim and weighs over 165 pounds. It is known for the amazing color illustration in its pages of the Devil and that is how it gained its name. 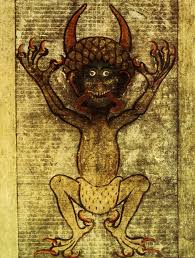 Historians believe the text was created in the Benedictine monastery of Podlažice in the Czech Republic in the early 13th century. Now, as if the scale of the Bible wasn’t enough, the Bible’s creation legend is even more bizarre. A monk in the middle Ages, who, after breaking his monastic vows, was sentenced to the horribly cruel death of being walled up alive, is said to have written it. Desperate to avoid his fate, the monk promised to write – in just a single night – a book that both glorified his church and also contained all human knowledge. His plan was accepted but by midnight, he was nowhere near completing the book. He decided he needed help but instead of praying to God, he prayed to Lucifer offering his soul in return for the finished book. The Devil responded to the monk’s prayer accepting the offer. Within seconds, the huge book was completed while the monk added the portrait of his mentor and savior in gratitude. Although, some say Lucifer himself painted the picture.

Experts agree that one person wrote the entire book and estimate it would take more than 5-years to complete – at least without supernatural help anyway.