21 April 2017 | Ghosts in the news, Haunted houses, Your True Encounters

This month saw the placing on the local real estate market of a small property in St. Osyth, Essex. That anyone would want to live there is, I think, unlikely but it may make for a wonderful paranormal business of some type and be an interesting investment as a result. The house is nicknamed ‘The Cage” and it has been featured in several television paranormal investigations. For what looks like a small village house was actually a mediaeval prison and one of its more famous ‘residents’ was Ursula Kemp, hung as a witch in 1582. The house was used as a prison up until 1908. 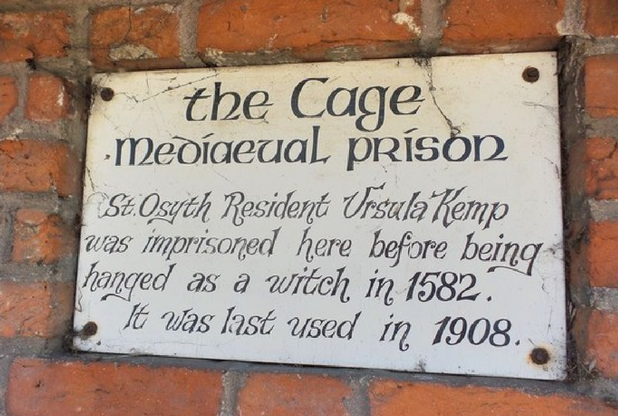 Poor Ursula Kemp, like many older and lonely ladies of her time, kept a cat for company and did things like minding children, making herbal potions and salves to sell, midwifery and so on to eek out a living. This was a dangerous time in England for lonely old women trying to make ends meet. Especially ones that kept cats and sold herbal ‘potions’. She was soon in trouble, accused of intentionally causing illness and death, through witchcraft.

The trial was most likely a travesty as neighbors and even her own young son, testified to the witch master general. She was accused of cursing a young child who fell out of its cot and died of a broken neck, of ‘bewitching’ another young girl to death by ‘murmuring’ at her and of setting her four familiars on a local man and his wife. Her son described the familiars ‘as a grey cat called Tyffin, a white lamb called Tyttey, a black toad called Pygine and a black cat called Jacke. He said that he had seen his mother give her familiars beer and cake, and let them suck blood from her body.’ Under examination by the witch finder, Ursula ‘confessed’ to him – in private – that the four familiars her son had mentioned were two male spirits, that killed people, and two female spirits, that brought sickness to people, and destroyed cattle. She also admitted sending her familiars to make Grace Thurlow lame and to kill Joan Thurlow, Elizabeth Letherdale and Kemp’s sister-in-law. She also named 12 other women as witches and 6 of these were also hanged.

Poor Ursula spent her last moments in ‘the Cage’ before being hanged and having her body buried in unmarked and unhallowed ground.

Venessa Mitchell lived at the Cage for several years and describes her experiences there at a website. Her experiences include the following account.

The  daylight hours in The cage were no less active than the night hours…ornaments  would fly of the mantel piece, the old chain from the original prison building would swing back and forward as if to remind me of the horrific history of my home and the hall stairs door would crash open in a forceful almost violent way, blood splatters appeared in the hall in broad daylight in front of witnesses apart from myself .  The TV  sound would go up and down with no one near the controls to adjust them and you would hear someone pacing back and forth  in the upstairs hall …it didn’t stop it was all the time and there was nothing I could do.

Could you spend a night at the Cage do you think?

One thought on “The Witches Prison”