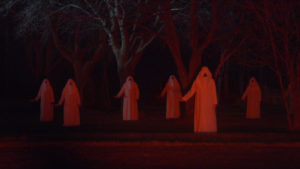 I’m 54-year-old and was born and raised in the Cumberland/Appalachian mountains of Virginia. I played in the woods alone, explored from mountain top to mountain top even when I was little – as young as 5 or 6. That was my backyard and my playground. I’ve worked, lived, hunted and camped in those mountains all my life. I’ve trudged those paths many-many times in the pitch dark and slept out on the ground without even a light to see by. Not once have I ever been uncomfortable in the woods or seen anything unusual – Same with Kentucky, Tennessee, North Carolina, and many other states.

In those days there was no cable TV or cell phones or internet so we just had to make do the best we could for entertainment.I quit school and moved to Ohio at the young age of 18 to go to work, and at the time moved in with a buddy named Paul. We would borrow Paul’s grandmother’s car and steal his grandfather’s beer that he kept outside in his car that he hid from her so we could take a couple of girls out for a night out outside of town. So off we would go on our excursions into the twilight hoping to find some obscure or at least some unnoticed farmer’s field to take our girlfriends to “get away for the night”.

On one of these occasions as we scoured the countryside, we came upon a field on the outskirts of town in the middle of nowhere that looked perfect to drive into the middle of a corn field and spin out a circle so we could make a spot where no one could see us so we could throw a blanket down and drink some beer and look at the stars. We hadn’t went and got the girls yet as we were just scoping the countryside out when we pulled up to a field and parked the car and sat there awhile; then noticed that across the field, maybe a hundred and fifty yards or so away, that there was a single file group of figures in brown-hooded robes coming out of the tree line.It freaked us out and we left in a hurry, but in those days we didn`t think too much about it because devil worshipers were all the news at that time, so we just marked it off as being that.

Years later I was listening to a radio show called Coast-To-Coast AM, and I heard a guy tell a story of a Dog man creature that attacked his car just outside of Columbus Ohio, wearing a brown-hooded robe back in the early 80`s when I lived there. I thought: hmmm, maybe that’s what those robed figures were I saw back during that same time frame. I have no idea about the reality of this, but I think it is more than coincidental that two people have a story about brown-hooded robed figures in the same area at the same time frame. I used to ride around in those surrounding towns just to kill boredom, and I used to drive out to London, Ohio at 2 to 4am just to watch the snow fall in front of my headlights on deserted roads, I broke down, ran out of gas many different times and had to walk. In those days I had never heard of the London werewolf or Dog men. But I was in all those areas during the 80`s when a lot of accounts were reported. I just wonder how many times I was closer than I ever realized or ever wanted to be to a cryptic fable than I ever wanted to be.