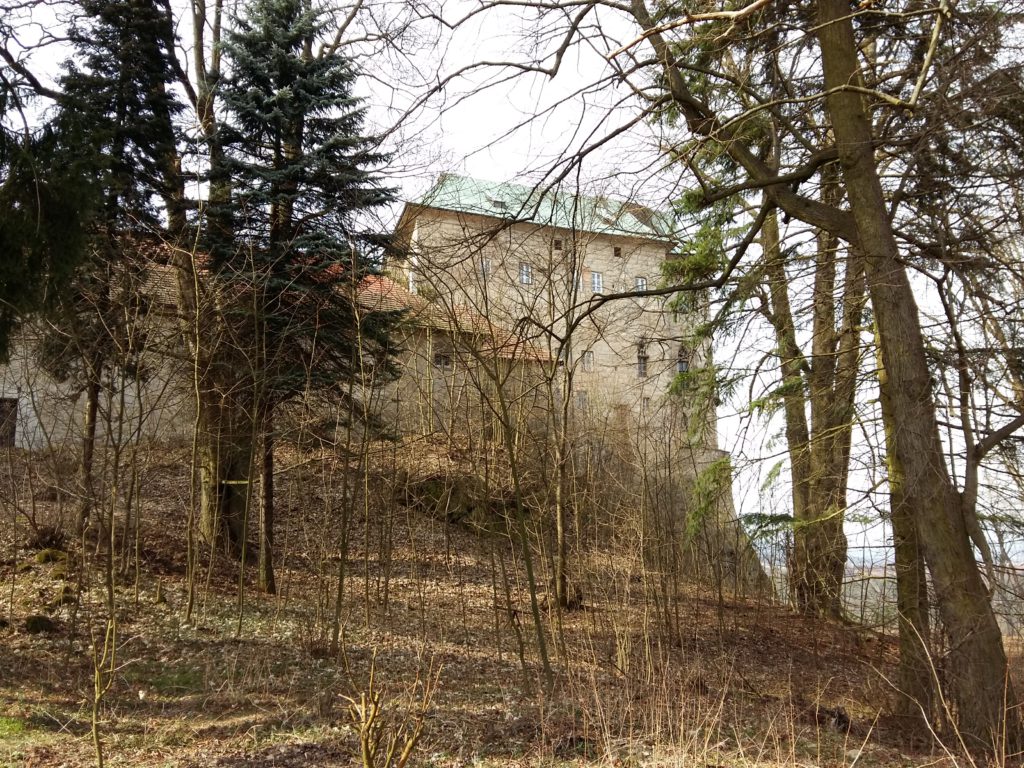 Are there portals to other dimensions, other existences, or planes? Well, if there are, one scary example might well be Houska Castle situated about 50km north of the Czech capital city, Prague, also known locally as The Gate To Hell.

Over 1000-years ago, much of the Czech countryside would have been dense forest. In the Houska area, those forests would have been dark, gloomy, damp, and eerie as the area is famous for its sandstone formations known as ‘Skaly’. The sandstone in the area erodes out into block-like formations that jut ominously in many locations, creating an eerie but beautiful landscape. Millennia ago, this landscape would have been like an alien world for the sparse populace in which the imagination would and could run riot! There were few settlements and fewer people who still clung to many pagan beliefs about woodland spirits, demons and ghosts. Not surprisingly, the area developed an evil reputation. Demons and half-human monsters were said to roam the deeply incised, tree-covered valleys, seeking human and animal victims and warm blood.

The discovery of a deep crack or fissure in the sandstone certainly wouldn’t have helped matters much in terms of the areas’ terrifying reputation. Efforts to fill the fissure with stones and boulders failed. In fact, they had no impact whatsoever. The fissure seemed endless; a crack of doom in the Earth’s surface from which that knows what monsters, elementals, and spirits emerged? Rumors suggested that this fissure without end was a gateway to hell and that demons and spirits used it as a route to Satan’s fiery regime for wicked hell-bound human souls and the innocent victims of demonic activity in the area. Local farms mysteriously lost animals and passers by avoided it in the darkness.

Something had to be done and at some point in the 900’s it seems as if a Chapel was built over the crack in the Earth in an attempt to close it and lock out the demons. In fact, no one is really sure when the Castles’ structure really was built, as mysteriously, the records have all disappeared. This fact is even more dramatic given that the Czech Republic is littered with fairytale-like Castles each with a thoroughly documented and proud history. The first mentioned structure on the site however was a small wooden fort in the 9th Century though it is believed that a structure might have existed on the site since the 6th Century. Part of Houska’s mystery is that it is the exception to the rule in not having a documented history. In fact, it doesn’t even appear on some maps; as if it were meant to be a secret that was kept secret.

The story of Houska becomes even stranger however, for as the structure was being built, the Landlord agreed that which ever condemned man would be lowered on a rope into the crack in the rock to describe what he saw there, would be freed. A volunteer was lowered only a few feet into the hole in the Earth before he started screaming hysterically. He was immediately retrieved and found to have suddenly developed snow-white hair, aged at least 30-years and had become quite mad. He died the following day without divulging what horrors he had seen in the gate to hell. One can imagine that work resumed on the Castle with even more urgency than before.

The Castle or structure that was built there was also very strange. It had defensive structures facing inside the castle as opposed to outside, to keep out intruders. Rather, it seemed designed to keep something in. Although it had several floors, there were no stairs connecting the floors and additionally, it had fake windows in the upper stories. It was a very strange Castle indeed. Added to that was its’ location, which was far from anywhere and not on any pathway or road. It did not have a source of water and it was for all intents and purposes a castle that was built where no castle would normally ever be constructed.

The fissure or endless hole apparently now lies beneath the floors of a small chapel. Painted on the walls of the inside of the chapel are some rather strange designs that include the only known example of a female left-handed centaur shooting a man with an arrow. On another wall, is the image of St. Michael plunging his lance into the mouth of a fearsome dragon? Other images include St. Christopher, an angel weighing human souls and the Christ. Having stood in the Chapel myself, I can tell you that there is an energy there that after only a short while becomes unbearable. I had a headache for several hours after leaving. Interestingly, these murals add mystery to the Castle as being left-handed in medieval times was thought to be a sign of evil (the left-hand path) and St. Michael was the Archangel tasked with fighting hell’s hoards. Despite all of this, strange sounds, moans and screams are said to be heard coming from below the Chapel and people have claimed to see demonic entities there, including a strange creature that looks like a cross between a human, frog and giant bulldog. 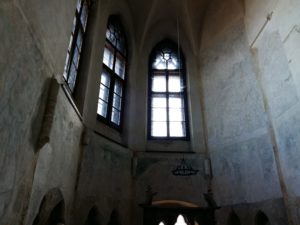 Over time, various nobles owned the Castle and its structure was changed and altered so that today, it is more of a small chateau than a castle. During the Second World War, the Nazi SS again occupied it; this is puzzling as why would a Castle in the middle of nowhere or of no strategic value be used by the SS? Many believe that the SS was running some kind of occult experiments there, perhaps with the energy portal, or another theory is that it was an experiment in creating the master race – a place where German SS troops would seed blonde haired Aryan women in the hope of creating a superior race of humans. No one knows for sure and the retreating Nazis destroyed all the records of what actually took place there.

Another strange tale regarding Houska that adds to its mystery and intrigue is the letter written by a famous Czech writer who spent a night there in the 1800s. In his letter to a friend, he recounts hellish dreams in which he visits 2006 Prague where a girl shows him moving pictures in a ‘small casket’ (iPad?) and he drifts by huge sandstone cliffs with square holes emitting yellowish light (very much like a description of modern apartments blocks that now litter Prague).

The Castle has also hosted other wicked and strange historical characters as if it were a beacon of darkness with some significance known to practitioners of the dark arts. One of these was the Swedish rogue commander of a mercenary army that chose Houska as its headquarters. Oronto was thought to be a black magician and alchemist who performed certain experiments at the castle. He and his soldiers terrified the local population who eventually summed up enough courage to shoot him. Even today, the courtyard of the Castle often contains tens of dead birds that have to be cleared.

Houska’s reputation for evil and strangeness is also recounted in the various tales of visitors who even now have experienced strange feelings at the castle and have experienced bad luck. The third floor is said to host the ghost of a beautiful young woman and paranormal activity has manifested on that floor with a glass that levitated in front of a group of people. Another visitor to the Castle saw two darkened figures that were muttering something about killing some young girls.

The Castle now hosts conferences and meetings on a variety of supernatural topics and is thought by some experts to be an energy portal that was recognized by the Nazi SS, Oronto, and others through history and used accordingly. But if Houska, is an energy portal what is a portal to? Other dimensions? Who knows? But this mysterious place with its foreboding atmosphere and strange Chapel decorations remains a mystery that continues to attract visitors and the curious to its walls.