This Reuters story is really very Halloween…… Did you know there was a real trade in bodies and body parts in America?

When Americans leave their bodies to science, they are also donating to commerce: Cadavers and body parts, especially those of the poor, are sold in a thriving and largely unregulated market. Grisly abuses abound.

LAS VEGAS – The company stacked brochures in funeral parlors around Sin City. On the cover: a couple clasping hands. Above the image, a promise: “Providing Options in Your Time of Need.”

Outside Southern Nevada’s suburban warehouse, the circumstances were far from comforting. In the fall of 2015, neighboring tenants began complaining about a mysterious stench and bloody boxes in a Dumpster. That December, local health records show, someone contacted authorities to report odd activity in the courtyard.

Health inspectors found a man in medical scrubs holding a garden hose. He was thawing a frozen human torso in the midday sun.

As the man sprayed the remains, “bits of tissue and blood were washed into the gutters,” a state health report said. The stream weaved past storefronts and pooled across the street near a technical school.

Southern Nevada, the inspectors learned, was a so-called body broker, a company that acquires dead bodies, dissects them and sells the parts for profit to medical researchers, training organizations and other buyers. The torso on the gurney was being prepared for just such a sale.

Body brokers are also known as non-transplant tissue banks. They are distinct from the organ and tissue transplant industry, which the U.S. government closely regulates. Selling hearts, kidneys and tendons for transplant is illegal. But no federal law governs the sale of cadavers or body parts for use in research or education. Few state laws provide any oversight whatsoever, and almost anyone, regardless of expertise, can dissect and sell human body parts.

“The current state of affairs is a free-for-all,” said Angela McArthur, who directs the body donation program at the University of Minnesota Medical School and formerly chaired her state’s anatomical donation commission. “We are seeing similar problems to what we saw with grave-robbers centuries ago,” she said, referring to the 19th-century practice of obtaining cadavers in ways that violated the dignity of the dead.

“I don’t know if I can state this strongly enough,” McArthur said. “What they are doing is profiting from the sale of humans.” 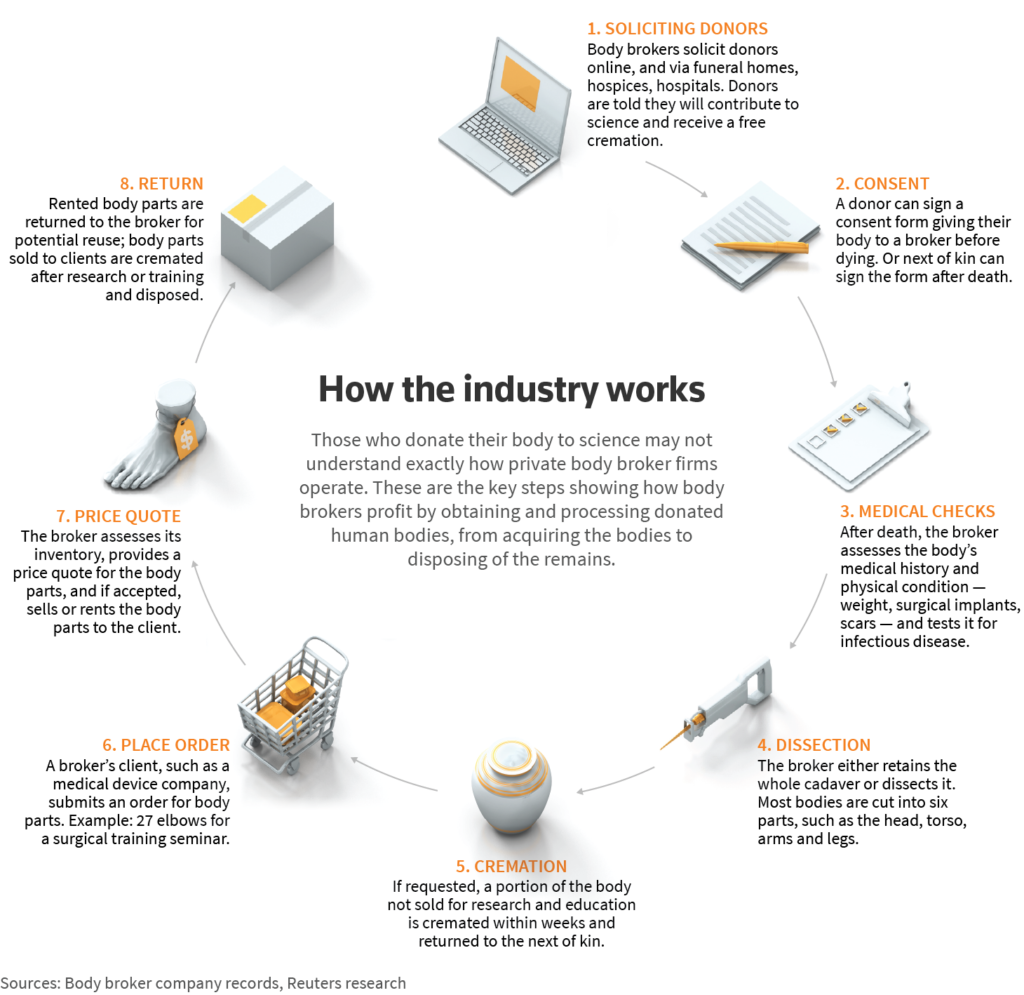 The full story of this grisly trade can be found here