Well, kind of. We actually went on a series of nights, most recently Halloween, and that time I went alone. Why go to a glitzy, Hollywood-induced costume party when you can celebrate it the old-fashioned way with a good old ghost hunt? A proper stake-out with coffee and biscuits. We went armed with a torch, digital camera, voice recorder, and of course our own senses and judgment – probably the most important tool of all, but also the one most prone to error. Amateurish tech by proper ghost-hunting standards I know, but you have to start somewhere.

As with my previous tale, this one comes from the Scottish town of Troon, specifically an old graveyard and church ruins on the outskirts called Crosbie Kirkyard. It dates back to 1681 but an older church apparently stood on the site as far back as the 1200s, so we’re talking really old here. It was officially closed in 1868 when the town got a bigger cemetery and the gates have been locked ever since. According to legend, the roof of the church blew off during a storm the same night Robert Burns, Scotland’s national poet, was born in the nearby town of Ayr. However, that tale sounds apocryphal and made-up. What’s more interesting is a poem made about the place by one John Laing, alleging it to be haunted by “ghaists an’ spunkies” (ghosts and strange lights). Again, don’t just take my word for it; all of this info can be found online. This is a real place with a real history.

If you know the local area well enough, there are a few ways to get there, the most direct being through the woods. The gate is permanently locked and the wall more or less insurmountable, though there is a way in by standing on a tree stump around one side and mounting part of the wall. A cemetery at night was a petrifying thought when I was younger so simply being there in the dark felt like something of an achievement. The hardest part was probably entering in; you’re never sure what’s over the other side of that wall. I almost had to remind myself that somewhere in here was the resting place of a one-time assassin named David Hamilton, though most say it was really his brother who was guilty and that David was just part of the plot, but that’s a debate for another day.

My photos were fairly spooky in themselves, showing dark trees and ruins looming up against a grey sky, not to mention the jagged metal of the cemetery gate, but there was nothing out of the ordinary. A few dust specs maybe. Then I set down my voice recorder and we exited the graveyard, hoping to pick up something in our absence, and returned a half hour later.

Just as the novelty of it all was wearing off, we took a seat on an overturned gravestone (sorry dead person!) and were gazing at the stars when a white streak of light came zooming past right above us. My friend thought it might be a shooting star, but it seemed much too low and small. Shooting stars travel in an arc whereas this light just shot straight by in a perfect line. If that was weird, it was to get even weirder.

As we set out on our way home another one of these lights appeared just over the ruined church, zooming into the treeline. It was lucky I turned my head round at that moment to catch it; I wonder how many lights there were that we didn’t see. There was no doubting it this time; it was way too low and minuscule to be a shooting star. I can only describe these lights as tiny white balls or globes which travelled very fast. Either it was a ghost (whatever that might be) or I witnessed a strange light phenomenon, possibly something similar to what we might now call will-o’-the-wisps or something we don’t know about yet. Maybe these lights were the ‘spunkies’ reported in John Laing’s poem centuries earlier. ‘Spunkie’ is an old Scots word which basically meant a strange light or glowing.

The following evening I listened back to the audio from my voice recorder, all 27 minutes of it, and I did find something, however faint. In-between the gentle wind and car noises is what sounds like a tap followed by three or four footsteps. I rewound and compared it with my own footsteps at the start of the recording and the sound was practically identical. I also tried reproducing the ‘tap’ sound by touching the screen of the phone and playing it back, and that too sounded quite similar. The whole segment is unique in the whole footage. Was it simply another person, you might ask? Well, although a main road runs nearby, barely anyone walks this way, especially at night; it’s a bit out of the way. Type in ‘Crosbie Churchyard’ on Google Maps and you’ll see what I mean. And I think it’s a pretty fair assumption that we were the only weirdos going into this place at night. I suppose the likeliest explanation is an animal, but the footsteps sounded too slow and heavy to be a squirrel or rabbit, though that’s just my own personal judgment. 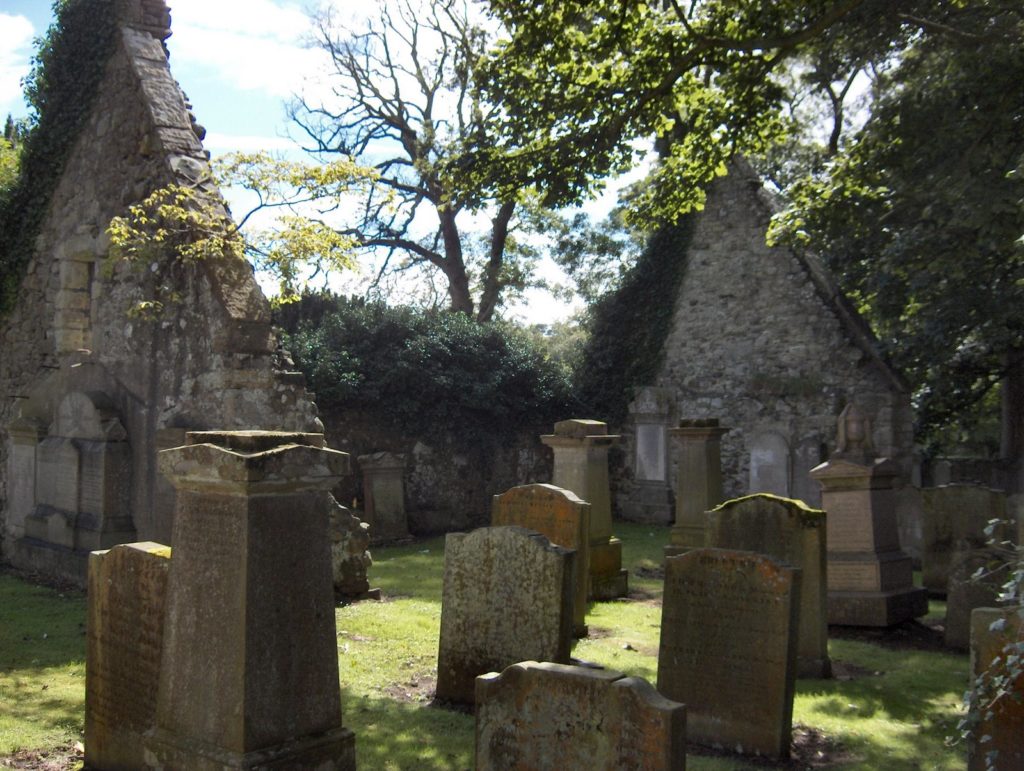 Nothing happened on the other nights but that still can’t diminish our experiences from the first time. Beginner’s luck I suppose. In fact the only vaguely paranormal thing we encountered on the second night was a noise outside my friend’s house on the homeward journey. Then the thought came to me that what we call the paranormal probably works in a very funny way or, bizarre as it sounds, like fishing. You can go 10 times and only catch something once or twice. All my run-ins with ‘ghosts’ so far have had that kind of theme: there’s something there, not overly clear or discernible, but still quite out of the ordinary, then in an instant it’s gone or doesn’t show up again. It’s not as if you can catch it up close and take it back to test in a lab, but you know there was definitely a weird element about the experience.

I don’t give much credit to feelings of being watched or of a ‘presence’ (after all, that you feel scared is a fact about yourself and not your surroundings), but I suppose it’s not a bad thing to say that at no point in the investigation was I genuinely frightened or alarmed. I even liked it in there, the magical stillness of it all. If one thing’s for sure it’s that the dead are less likely to harm you than the living, but whether they are all truly at rest, I still can’t say.