Did you ever watch the Six Million Dollar Man on TV?

Back in 1976, for an episode called the ‘Carnival of Spies’, the crew were readying the Nu-Pike amusement park in Long Beach, CA. The director saw a corpse prop hanging from a rope in the corner of the set – shot in a funhouse – and didn’t like it so asked for it to be removed.  When a crew member tried to remove the prop body, its arm came off revealing mummified flesh and bone!

The set suddenly became a potential crime scene and medical examiners were called. They managed to find a 1924 penny and ticket to the Museum of Crime in LA in the body’s mouth and were able to identify the body as that of outlaw Elmar McCurdy who died in a 1911 standoff in Oklahoma. 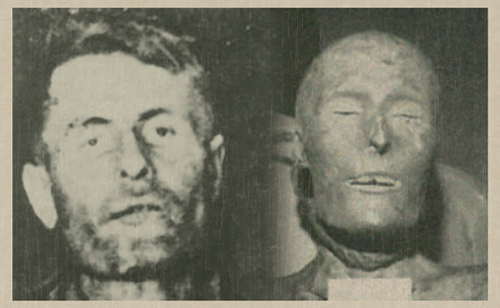 Apparently, his death came at the hands of a posse sent to follow him after he and a handful of others robbed a train of $46 and a shipment of whiskey. His body was embalmed with arsenic and used as a prop by the coroner who then charged people a nickel to see the corpse of “The Bandit Who Wouldn’t Give Up”. Eventually, a man claiming to be McCurdy’s brother appeared and asked for the body to give it a proper burial…. only to place the body on display as part of a carnival… Somehow, the body found its way to the Nu-Pike where visitors thought it was a “dummy”.