I was meant to be working in the South China Sea, just off the coast of Thailand, for three days but found myself holed up in a dingy hotel room for six weeks, waiting for a series of Typhoons to pass through the area. Whilst the breaks between storms allowed some time for exploring the local area, there are only so many Temples, markets and beaches to keep one amused in a backwater fishing village. In any event, it wasn’t considered safe to be out when the Typhoons hit so much of the time was spent sitting out each storm in the hotel.

It was during one of these long nights, power out, rain lashing the windows, themselves likely to fly loose under the sheer weight of the wind, that all I could do was lie in bed, hoping that some sleep might come between the explosions of thunder. A triple flash lit up the room, and at the foot of the bed I glimpsed what appeared to be a mist coming in under the door. Thinking that there may be a problem outside, I made to get up to investigate.

That was when I realised that I was completely paralysed.

Unable to move, I started to panic a little. “What if it isn’t mist, but smoke from a fire?” I thought. Then I noticed an odd green light under the door. The power remained off inside the room, so in my confused state this made the fire option seem even more likely. Struggling to make sense of this sudden paralysis, I push with all my might to get up off the bed, to no avail.

Another bolt of lightning outside. A weird sulphurous flash on the transformer mounted on the pole outside the window. If I could have screamed, I would have. For there, crossing from the door, and across the foot of the bed, was a dark humanoid figure. I could see no features in the instant that the lightning flash lit the room, nor any details of who, or what, this figure might be as, now lit only by the eerie green light under the door, it made its way into the toilet. 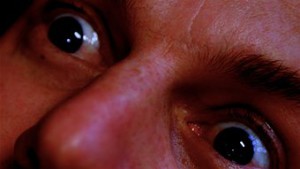 My eyes, for that was all that I could move, remained firmly fixed on that toilet door, through which the eerie green glow now emanated. The tap turned on. I could clearly hear the water hitting the sink, and gurgling down the drain. I could feel my heart pounding in my ears. Completely helpless, with a strange being, for that is the only way I could describe it, in the room, I was, frankly, terrified.

It seemed all of an eternity before the next flash lit up the scene. By the time the crash of thunder had died down, the green glow from the toilet had faded. The corridor was again in blackness. The mist, which had continuously swirled around the foot of the bed the entire time, had disappeared. I could move again!

Yet still I lay there for the longest time, holding my breath, listening for any sound which may be coming from the toilet. When I was convinced that there was no longer anyone in there, I tentatively made my way around to the toilet door. Pushing it open, I was startled by the lights suddenly coming on. (Yes, I screamed). The sink was wet, despite the fact that it had been several hours since I had been in there myself.

In the years since, I have swayed between the alien and ghost explanations, but neither really explain the strange behaviour exhibited by whatever it was.

What do you think?

One thought on “Thai Terror”