How do you make money from a rental property that you can’t rent? 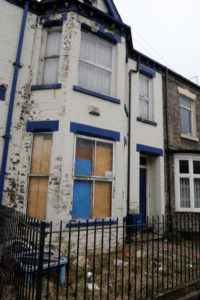 A seven bedroomed house in Hull known as The Hostel has made the headlines recently for all the wrong reasons. It’s owner left the home shortly after moving in as a result of the atmosphere and strange occurrences. He tried to rent it but the longest lasting tenant managed just 4-days! Even trying to have remedial work done on the home is an issue. The last workmen who showed up left in a hurry without their tools and told the owner he could keep them – they were not going back to the house again.

People who have been there report being strangled and pulled around by spirits. One previous owner called the police after being strangled in bed and then dragged across the bedroom by invisible forces. The police didn’t know what to make of it but no crime had been committed. As they left, a bookcase fell on them.

The current owner tells of the shadow of a child that emerged from a fireplace. He was so scared he didn’t move for over 15 minutes. Passers by see children and other figures at the windows despite the home being empty and the police have been called on many occasions.

Mediums who have visited the home suggest that the house was once used as a place to care for terminally ill children who instead of being looked after were abused, tortured, and killed. The cupboard under the stairs is the focus of much of the activity as this was where children were locked and left to die.

Objects move around, some flying across the room, and doors open and shut by themselves. The owner once left the kitchen momentarily to find his steak knives carefully rearranged. Visitors report being strangled, pushed, and generally a very scary atmosphere. Some have vomited once inside.

So what do you do with the house you can’t rent? You open it up to ghost hunters and thrill seekers….. you too can spend a night in this very haunted house in Hull – if you are brave enough.