Loftus Hall in Wexford, Ireland is considered to be Ireland’s most haunted house. More a mansion than a house, Loftus Hall was built by the Redmond family during the Black Death of 1350. It was confiscated by the Loftus family in 1650 during the Cromwellian era. It has subsequently been both a nunnery and a hotel before falling into disrepair and it is now slowly being restored.

During the 16th Century, the occupants were the Tottenham family – Anne Loftus had married Mr. Tottenham and they lived their quite happily with their two daughters – Anne and Elizabeth. The house was the center of social activity often filled with well to do guests enjoying the countryside and the Sea air. Occasionally, storms in the area would force ships to harbor nearby and their occupants might shelter at the Hall enjoying the hospitality of the Tottenhams. 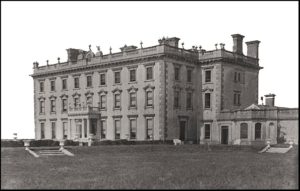 It was during one such storm, a storm the like of which had never been seen and that went on for days and days, that daughter Anne was to fall head over heels in love with a young gentleman sheltering at the Hall. They spent long hours with each other and yearned for the weather to abate so that they could take some air walking by the Sea together.

One evening, as the Tottenham’s and their sheltering guests played cards together in the drawing room, a card slipped from the young mans hand and young Anne bent down under the table to retrieve it. As she did so, her hand brushed against the young mans foot. To her utter horror and dismay, what she felt and saw was not a foot but a hoof. She screamed of course and the table was overturned reveling the cloven hoof to everyone there. There was uproar and shouts of ‘the Devil.’ By the time, order was restored, the young man had disappeared leaving a hole in the ceiling through which it was assumed he had escaped and a pillar of dark smoke where he had once sat.

Totally distraught at having fallen in love with the Devil or, at best, a demon, Anne locked herself in her bedroom where despite her family’s concerns, she slowly went insane and eventually died of starvation.

These days, the ghost of Anne is said to wander the building. The Hall was completely rebuilt in the 1870’s but it was said that no matter how hard workmen tried to repair the hole, it could never be truly repaired. Poltergeist activity and Anne’s wanderings also led to calling in a Priest for an exorcism but this failed to stem the activity.