As you may know, I wrote a book about Paranormal Sex. It didn’t really sell which is strange because I think it one of my best and doesn’t sex sell? We have tried a couple of different titles and covers and still it does not sell. So in a last ditched effort to spur some interest in the book – with new title and cover in kindle format – here is an excerpt….. 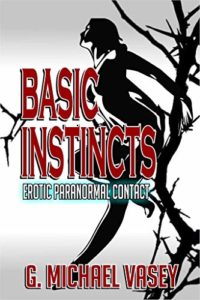 A novelist called Robert Moss has also described the experience of being visited by a horrific hag which transforms into a beautiful woman. Moss remembers how, as a teenager, a horrible hag-like creature with many arms and floppy, withered breasts entered his room and attacked him. He lay paralyzed as the entity moved up the bed, stood on his chest, and then lowered herself onto him. Moss explains how,

“Despite my disgust, I am aroused and now she is riding me. Her teeth are like daggers. My chest is spattered by blood and foulness from the rotting heads. There is nothing for me to do but stay with this. I tell myself I will survive. At last, the act is done. Satisfied, the nightmare hag transforms into a beautiful young woman. She smells like jasmine, like sandalwood. She takes me by the hand to a forest shrine. I forget about the body I have left frozen in the bed.[1]”

Not everyone who experiences the Old Hag is happy to put it down to sleep paralysis. Like me, they notice some unavoidable discrepancies between having a waking dream and an intrusion into their reality. This poster with the name LucidDreams expressed his/her doubts in a public forum as follows (edited for readability) [2],

Sleep paralysis doesn’t even begin to explain away the experience I had. I found this forum afterwards looking to see if others had had a similar experience, and read up about the “Old Hag Phenomenon”. A lot of the accounts were spot on, except for one thing… I was wide awake and able to move. Anybody that tries to rationalize this experience as a sleep disorder has obviously never had it happen to them. That’s the problem though. People who have never had a paranormal experience won’t believe in them, and will try to come up with a rational explanation that is often more ridiculous than just believing in ghosts.

I was lying down downstairs in the family room about to doze off. It was really dark in the room with just a clock light and the small green light from my PC to allow some vision, once your eyes adjust. I heard my steps creak, which isn’t unusual at all because I ran a dehumidifier down there, and as moisture is picked up that will happen. Only it didn’t stop there. I immediately heard the next stair down creak and it no longer just sounded like creaking stairs. It sounded like something was descending them! All the hairs on the back of my neck stood up, and I just had the feeling that I wasn’t alone. I was WIDE awake at this point, and not paralyzed, for the record. I looked in that direction and saw what looked like a black glob, a form without any general shape. It was jet black, so black that it even stood out in a very dark room. This form wasn’t moving like a person in motion would, it was “orbing”, like it would be at one spot one instant, then at another. It went from the middle of my stairs, to the bottom, and then was in front of a coat rack in the corner of my room, and then right at my feet. I’m still not 100% convinced that my eyes aren’t just playing tricks with me at this point, so I’m not completely terrified… yet. And then it happened.

I saw what looked like an angry old person hovering above me. I couldn’t tell if it was male or female, but it looked very old, wrinkled, and had scraggly wavy hair. There were hands with long, sharp nails extended towards me. All I could see was a head and hands, nothing else. It wasn’t a solid figure, it looked more like what a mirage is described as. I cannot reiterate enough how angry and mean the expression on this things’ face looked. It looked like it wanted to scratch me. I (being fully able to move), pulled my blanket up over my head and started praying. I even made a cross over my chest with my fingers. When I looked up again… it was gone.

I quickly reached over to turn on a light, afraid of what I might see when I did, but it was a risk I was willing to take at the time. Nothing there. I haven’t seen it again since, and this was several years ago now. Needless to say, I never slept down there again, and it took me about a year to start sleeping without a night light on again.

What makes this really creepy is that a friend of mine told me and my buddy a similar story many years ago, when we were kids. This kid lived right across the street from where I live now (where this happened), and a couple houses down. He told us that one time, when he woke up, he saw an old lady standing over him with long, sharp claws, and that she started screaming and scratching him. Actual physical contact! He said it scared him so badly that he passed out again. When he woke up, he at first thought he just dreamt it, until he saw the dried blood on his arms. Me and my friend didn’t believe it, of course. At that time, I’d never had any paranormal experience and was one of “those people” I mentioned above. We just laughed and said, “yeah right”, and he was actually upset and said something like “I don’t care if you believe me or not, it happened”. I certainly believed him after my experience.

Turns out that people have been witnessing these “things” damn near since the beginning of recorded history, after looking into it. You would think it would be taken more seriously. I don’t know if ghosts, demons, angels, etc… exist, but I can tell you without any doubt that this Old Hag phenomenon is very real, and at least in my case, had nothing whatsoever to do with a sleeping disorder. How would all of these people just “coincidentally” happen to have the same hallucinations (hear footsteps, dark cloud, old person, long sharp nails)? It’s inconceivable that that can be by chance. And not only one, but two senses failing at the same time (not just vision, but hearing as well). They try to come up with “rational” explanations, that’s not rational at all. It’s far more rational, IMO, to believe that there are simply things we cannot explain or quantify, but they do non-the-less exist anyway.

I have to say, I totally agree…