You may recall Amanda Teague, if you follow such things, as the Irish woman who married her ghost pirate lover, Jack, in 2006? She was one of several women I covered in my ghost sex book of a couple of years ago. Well, according to Irish Central, the relationship has ended in divorce.

Teague explained on a British TV show, that she began to explore spirituality in 2010 after her son died in hopes of finding a “link to the other side.” She said it was five years before Jack presented himself, and even then, it took Teague months for her to believe “he was who he said he was.”  She began to feel uncomfortable several months into the marriage saying “things happen, you can’t blame everything on the paranormal,” admits Teague, “but I also knew about spiritual attachments and possessions. He was basically like an energy vampire”, she said. 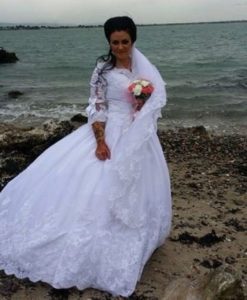 After suffering a variety of ailments and surgery, matters came to a head. “When spirits stay around too long, they need an energy source and unfortunately Jack was using me as an energy source. He had never accepted his own death so he wanted to continue living through my body. In the end, a lot of red flags, and in the end, after the operation, I realized that it definitely was him and it took me a while to figure out whether he knew or not that it was definitely him, that he intended to harm me. When I realized that yes, he knew, I ended up having an exorcism in December of last year,” she told the BBC audience.

She has since cut all ties with the spirit world, the article claims….