Pohádka means fairytale in Czech, but it is also the name of a reputedly haunted and cursed location in the Czech Republic.

It all began May 1828, when in a nearby village called Strážov, a fire broke out. One house caught fire and a storm blew the hot embers across the roofs of neighboring houses. In the end, 78 houses including the town hall, were destroyed. The villagers wanted to know why why such a horrible event would take place in such an idyllic place and soon they had an answer. Near Pohádka by edge of the forest, was a small hut occupied by a strange old woman. There was talk of her being a witch. This poor old woman was determined to be the culprit and to be the cause of the fire. She was chased from her home, stoned and killed. But not before she had cursed the place. 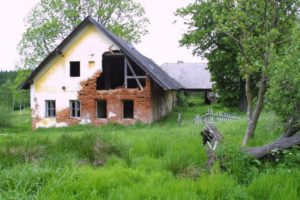 The curse apparently took effect and people in the area have suffered as a result. One inhabitant went mad after finding her husband hung in the house and another committed suicide after his wife and children disappeared in the forest never to be seen again. The last occupant was one Ivan Roubal. He was recently convicted for murdering five of his neighbors. Two of his victims’ remains were never found and it is believed that Ivan fed the bodies to his pigs.

According to wikipedia,Roubal rented a homestead near Čachrov called Pohádka (originally called Christelhof ). He raised hens and pigs there . He met František Heppner, who wanted to build a water saw here . In December 1991, however, Heppner and his Russian girlfriend disappeared. Roubal justified their disappearance by leaving for Germany. There would be nothing suspicious about that if Roubal didn’t start using their vehicle and selling their furniture. In addition, he was said to have told one of his sons that he had killed both people and had pigs eaten. However, the son denied it in court. The court therefore later acquitted Roubal of these murders, saying that unless the bodies of the missing were found, it could not be ruled out that these people were alive.

On July 26, 1992, the taxi driver Vladimír Strnad disappeared. He was last seen with Roubal, they both left Prague and each drove one car. Roubal got rid of the body by taking it to Zákup and throwing it into the septic tank of another’s house. The next day, Roubal started using both cars. The body was found on May 25, 1993 . The body was in such an advanced stage of decomposition that it was not possible to determine the cause of death. 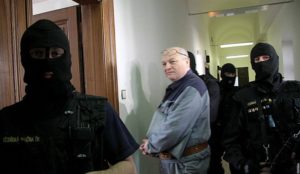 Roubal on his arrest

On December 10, 1992, the jewelery seller Václav Horký disappeared . After his disappearance, Roubal started using Hot Vehicle and tried to sell his house. To this day, Horký has not been traced. In 1995 , the court declared Horký dead .

On May 26, 1993, Roubal met Josef Suchánek through an advertisement . He killed him and then threw his body into a pond in Veselí nad Lužnicí . Then his apartment was robbed. The body was not found until October 3 of the same year when the pond was drained.

On March 8, 1994 , Roubal committed the last murders. In the evening he came to the ZAPAP car rental office, which was located in the basement of the Pod Zvonařkou 2238/4 house, Prague 2, where he handcuffed the owner of the company Petr Kudrna, Peter Magdolen and a casual visitor to the taxi driver Jiří Semerád. He tied them all to a goat and tied their legs around their necks . He then stole the office and disappeared. Kudrna and Magdolen strangled themselves with the weight of their own feet , but Semerád managed to free himself from the handcuffs and call the police. On March 30, Roubal was arrested.