Have you ever played with one? We used to play with one all of the time at school as kids. I don’t recall anything bad happening as a result of it but this Reddit user did……..

This story happened, in October of 2004. Back when I was still a 3rd-year high school student. My friends and I, stuck around the school, late at night, after our annual Halloween Party. We had agreed to try out my friend’s Ouija Board. It wasn’t the brightest idea, but we needed a thrill.

We found a nice spot under a huge Narra Tree and proceeded with our half-assed ritual. There were 5 of us, 2 boys and 3 girls, we were all expecting some kind of paranormal contact. Rumors had it our school was haunted, but we’ve never really experienced anything first hand, and it was Halloween when all the spirits came out to play, we all wanted to get spooked. Also, we’ve never seen a Ouija Board first hand before, so we were pretty excited.

Our school was an old Spanish Colonial House, built in the 1800’s when the Spaniards still occupied the Philippines. We were in a section of the school that doesn’t get used often. Located beside a creepy old Jesuit House, people only go there when they needed the use the restroom, store equipment on one of the sheds, or make out with their boyfriends or girlfriends.

We sat down in the middle of an open space, with only an exposed bare bulb nearby illuminating the surroundings. We were all having a laugh scaring each other with what-if scenarios. It was your typical dumb kids, doing dumb things.

My friend who brought the Ouija Board proceeded to place it in the middle of our circle. If I remember correctly, it was the glow-in-the-dark version, which we found hilarious. But it gave us the ability to see what was written in the dark.

Not knowing what to do, and going after what we’ve seen in movies, we all proceeded to place our index finger on top of the Planchette. We sat there looking at each other, until one of us said, “What’s next?”

We didn’t know if there was a proper way to start the ritual, plus the board didn’t come with instructions, so we decided to just throw in a question.

“Is anyone there?” I called out into the darkness.

“If there are spirits living here, please talk to us.” One of the girl’s joined in.

We clearly had no idea what we were doing.

Not even the slightest bit of wind.

One of my friends jerked the Planchette and the girl who brought the Ouija Board screamed, breaking the silence. We all laughed at how ridiculous it was.

After a bit of joking around, we decided to give it another go.

We all placed our index fingers on the Planchette once more and asked, “If there’s anyone there, we would like to make contact.”

“Don’t break the circle.” One of my friends jokingly said.

We were just about ready to give up when the wind started to pick-up. The stillness broke and the darkness around us seemed to move.

Just a coincidence, we thought.

I was excited. It was like a scene from a movie with dirt and dead leaves swirling around us.

“Guys, I’m scared.” My friend sitting beside me said. “My mom warned me about playing with forces we don’t know.”

“Were you killed during the war?”

“Are you the headless Priest, that roams these halls?”

“Do you know Jose Rizal?” (Our national hero.)

“Are you a hottie?” My friend giggled.

At this point, we were all throwing random stupid questions.

“This is bullshit. I don’t want to do this anymore.” My friend said, exasperated.

We were all thinking the same.

Just then a group of dogs, from the neighboring house, started barking at us through the chain-link fence. These 6 dogs were growling and showing teeth. We all screamed and without finishing the ritual, bolted right out of there!

We didn’t see each other until after Halloween break and this is where the story gets creepy.

One of the girls told us about a weird experience she had the night after playing with the Ouija Board. She had gotten home late, after hanging out with her friends from the neighborhood, when she realized she forgot the keys to her house. So, she called her brother up, who was then still sharing a room with her, and what he said crept the hell out of her. He swore she was already home. He claimed to have seen her walk-in a while ago, and that she looked really tired and saw her head straight to bed.

“Creepy. But no need to freak ourselves out,” was all we thought.

Besides her brother must have just been tired and seeing things. But then my other friend started telling us about an encounter she had that Halloween night.

She was going up to her room when the lights started flickering as she was ascending the staircase. Your typical horror movie visuals, shrug it off to faulty wiring. But just then she saw the door to her room open and a dark figure stepped out and stood atop of their staircase. She couldn’t make out the entity’s face, but she recounted that she couldn’t move and felt utter dread as the figure stared down at her.

“No way!” My best friend who just joined in the conversation said in disbelief.

“Something happened to me as well.”

He recalled that he was sleeping one night when he woke up feeling really uncomfortable. He described his vision as having TV-like-static, and a feeling of heaviness surrounded him. He looked around the room and that’s when he saw, a bloody, charred face, with piercing red eyes, grinning at him through the window.

I couldn’t believe what I was hearing because I had an almost run-in with death that night. After the ritual, I was sleeping in our Sedan on the way home after fooling around with the Ouija Board, when I felt our car jerk. I woke up instantly. Looking out the window, I found out, that we’ve been hit by a huge oil tanker. I panicked and leaped out of the car. Luckily my mom and I survived the crash since the front of the car was a total wreck.

I still don’t have an explanation why those things happened to us. But thank God nothing happened after that.

I never played or gotten near a Ouija Board ever since. 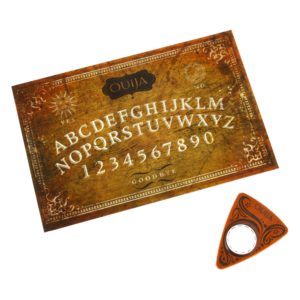 Later on in life, I avoided Ouija boards like the plague. The one time I did come into contact with one is recounted in detail in my book – My Haunted Life – in a story I called ‘Just a Game’. 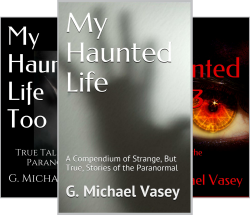 I also used the Ouija board for an entire chapter in my novella The Lord of the Elements. It is via his friend’s Ouija board session that Edward first makes contact with this demon.

I’m thinking that maybe my next book might take a look at the subject so if you do have any stories, experiences or indeed, thoughts – please do let me know and perhaps, I will include them! Use the form below to submit….